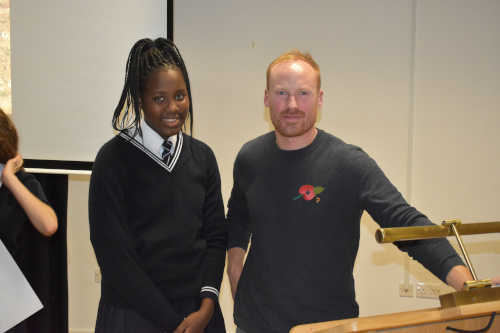 What an exciting Siena Society talk we had this week! Rick Findler, a war photographer who has travelled to some of the most dangerous countries in the world, came to speak to the girls about his career and experiences. Rick spoke about how he started out as a photographer selling local pictures, and how he established himself and now sells pictures to renowned newspapers such as the Times. There were some interesting facts – did you know that photographers like Rick fund their own trips, and then offer their pictures for sale to news outlets, receiving an average of £150 for a photograph which appears on the front page of a newspaper like the Times.

Rick spoke about some of the hair-raising experiences he has been through, for example continuing to take photographs while being attacked by a policewoman wielding a baton, while covering the recent protests in Hong Kong. He also explained the difficulties of remaining impartial in the face of atrocities, for example photographing a Chinese man being beaten by the protesters in Hong Kong Airport, but being unable to help as his role is to record events not to change them. More exciting talks coming soon!
Miss Bellerby
Head of Sixth Form

Categories: Sixth Form Senior School Trips Sport Prep School General
Pastoral Care
Sixth Form
The Sixth Form at St Catherine’s is a place of academic rigour, where girls are encouraged to develop their thinking and to stretch themselves. At the same time, we offer a supportive and nurturing environment.