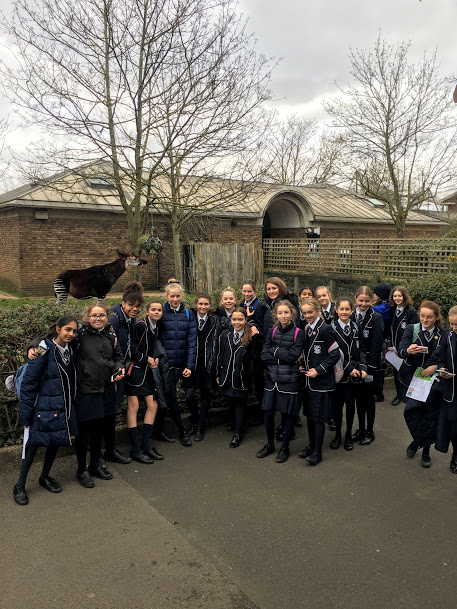 On Friday 13 March, the Year 7s took a coach to London Zoo. At the Zoo, we saw a range of different animals and insects: from tigers to butterflies, the list was endless. First, we were able to see the rather large hippos, then the towering giraffes and okapis (part of the zebra family), who were very calm, even with so many of us crowding around. We admired the African Red Dogs for a while, then moved in a circle back to the giraffes, when we were lucky enough to be able to see them being fed. Next, was the humid rainforest enclosure, where there was a great number of exotic animals running about, sleeping and eating. We grew fond of the quite cheeky monkey, swinging about and having fun.

We continued on to the night-time exhibit (a very dark place), where we saw multiple nocturnal creatures, that were scurrying around, including mice. After a well earned lunch, we decided to look at the penguins, which were extremely adorable and made many hearts melt. The animal show, soon after, was very intriguing as we got to hear some facts about our favourite animals. All in all, we all enjoyed our lovely trip and learned a lot about animals. Thank you to all the staff that came and helped.

Categories: General
Pastoral Care
Sixth Form
The Sixth Form at St Catherine’s is a place of academic rigour, where girls are encouraged to develop their thinking and to stretch themselves. At the same time, we offer a supportive and nurturing environment.