St. Catherine's School | About Us | History of St Catherine’s

In 1919 the Convent and School moved to the present site of Pope’s Villa, with its buildings and grounds on both sides of Cross Deep joined by the underground passage known as Pope’s Grotto. By 1920 there were 100 children in the school of whom approximately 20 were boarders.

From the late 1940s, the grounds were extensively developed to include a spacious hall, more teaching facilities and a swimming pool.

In 1991 the Sisters of Mercy moved out of St Catherine’s, after 77 years of dedicated service.  They sold the river side site and a charitable trust was set up by the parents, who purchased the garden site and appointed the first lay Headmistress in order to ensure that the school would continue to thrive.

The school has 440 pupils at present, with 110 in the Prep School and 330 in the Senior School.  The charism of the Sisters of Mercy is still very much alive as was evident when we celebrated 100 years of excellence in ‘Mercy’ education in 2014.

As we move into our next 100 years, we continue to plan further developments, which will include upgrading the Sports facilities and the Music Department in our quest to help our girls find enjoyment and success in everything they do at St Catherine’s.

The Meaning of the Lily 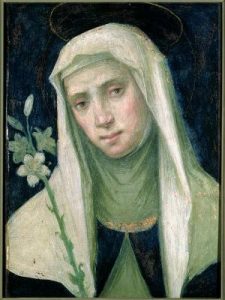 The white lily is a sign of purity and is one of the symbols associated with St Catherine of Siena. The lily has been an important flower since Biblical times. Like other flowers the lily too has different flower meanings.

Fra Bartolommeo did a beautiful painting of St. Catherine of Siena with a lily. She is wearing the black and white robes of the Dominican Order. St. Catherine lived in Italy between 1347 and 1380.

According to the Bible, petals of the white lily signify virginity, purity and the radiant soul of the Virgin Mary. This notion of purity had been with the lily flower since the ancient days. The Chinese and the Greeks had linked the white lily to purity. For the ancient Egyptians the lily meant growth and fertility. To the Chinese, the symbolic meaning of the lily is summer, good luck and abundance.

This Section
Pastoral Care
Sixth Form
The Sixth Form at St Catherine’s is a place of academic rigour, where girls are encouraged to develop their thinking and to stretch themselves. At the same time, we offer a supportive and nurturing environment.