Extra-curricular Drama is extremely popular at St Catherine’s. In recent years we have put on The Lion King, Sister Act and Bring It On! The main school production, performed in the Spring Term, is open to all girls from Year 7 to Year 13. Pupils make up the cast, the backstage crew, the costume designers and the technical crew, so there is a chance for girls to get involved in elements that interest them. This year, girls will be singing their hearts out to Dolly Parton’s ‘9 to 5’, which promises to be yet another show stopper.

We also put on a non-musical play in the Summer term for Year 9 upwards. Last year, it was Terry Pratchett’s ‘Wyrd Sisters’ at The Exchange, Twickenham. This allows pupils to explore some more challenging pieces, and perform in a real working theatre. Again, pupils can participate both on stage and as part of a backstage team.

A cast from Years 6 to 8 also participate in the Shakespeare Schools Festival, performing an abridged and hilarious version of ‘A Midsummer Night’s Dream’. The link between the Prep and Senior school is something which we really enjoy exploring through Drama.

We also run Drama Club between productions, so there is always a way to be involved.

Kurl Up and Dye 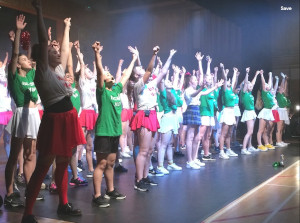 Bring It On Photo Gallery

This Section
Pastoral Care
Sixth Form
The Sixth Form at St Catherine’s is a place of academic rigour, where girls are encouraged to develop their thinking and to stretch themselves. At the same time, we offer a supportive and nurturing environment.

Enrolment for Year 7 2023 is now open and we have a small number of Prep and Senior places still available for September 2022, including our two-stream Year 5 and Year 6. For all enquiries, please contact Admissions (admissions@stcatherineschool.co.uk)